How we helped Hivemap provide clarity in the construction industry

Hivemap is all about providing clarity in construction.

Turning blueprints into reality is challenging. You need to know your project inside out, from the 30,000 foot view right down to the individual brick.

Hivemap’s ground-breaking artificial intelligence tool allows project managers to do just this. It cuts through the noise to deliver answers. Fast.
Hivemap came to us following great feedback on an early prototype from their initial customers. The goal was to develop this early stage prototype into a working product.

Hivemap have built a machine that reads and understands everything in a construction project. What’s more, it uses this understanding to predict future project risks.
Hivemap’s product provides an automatically generated mind-map of everything that is happening in a project.
This map is navigable and enables many project documents from multiple sources to be searched and explored in context.
The map is the central focus of the Hivemap platform, used by project managers on a daily basis.The map needs to show the relationships between different areas of the project and highlight the impact one action has on another area.

- The map makes the lives of project managers easier.

“The Danger Farms team were a pleasure to work with, grasping complex concepts quickly to bring their industry-leading knowledge and expertise to further develop our product”

How we worked with Hivemap

Research
We started the project by running multiple workshops with the founders to discover what was already known about the way the users interact with their early prototype, and where the grey areas or question marks existed.User testingWe used the information from our initial workshops to create low-fidelity wireframes to capture the workflows. This was a cooperation between Hivemap, our design and product teams. Once Hivemap were happy with our sketches, we took those to potential users.

UX / UI design
Using the findings from user interviews we set out to design the screens. Through several iterations we discovered edge cases, simplified and merged initial features, keeping usability, discoverability, and development cost in balance throughout. When we strayed further away from the solutions already tested with users, we returned to the users again, to ensure the product was still in line with what the users will expect.

Build
During the build phases, we focused on developing the visual side of the navigable map, a visual representation of a complex and large dataset. We targeted both modern and outdated browsers, as our research has shown that many potential clients are still working on legacy systems.The main challenge was implementing the navigable map with a wealth of functionality that enables users to do their jobs efficiently, but keeping it simple enough, so that usage is easy to pick up. 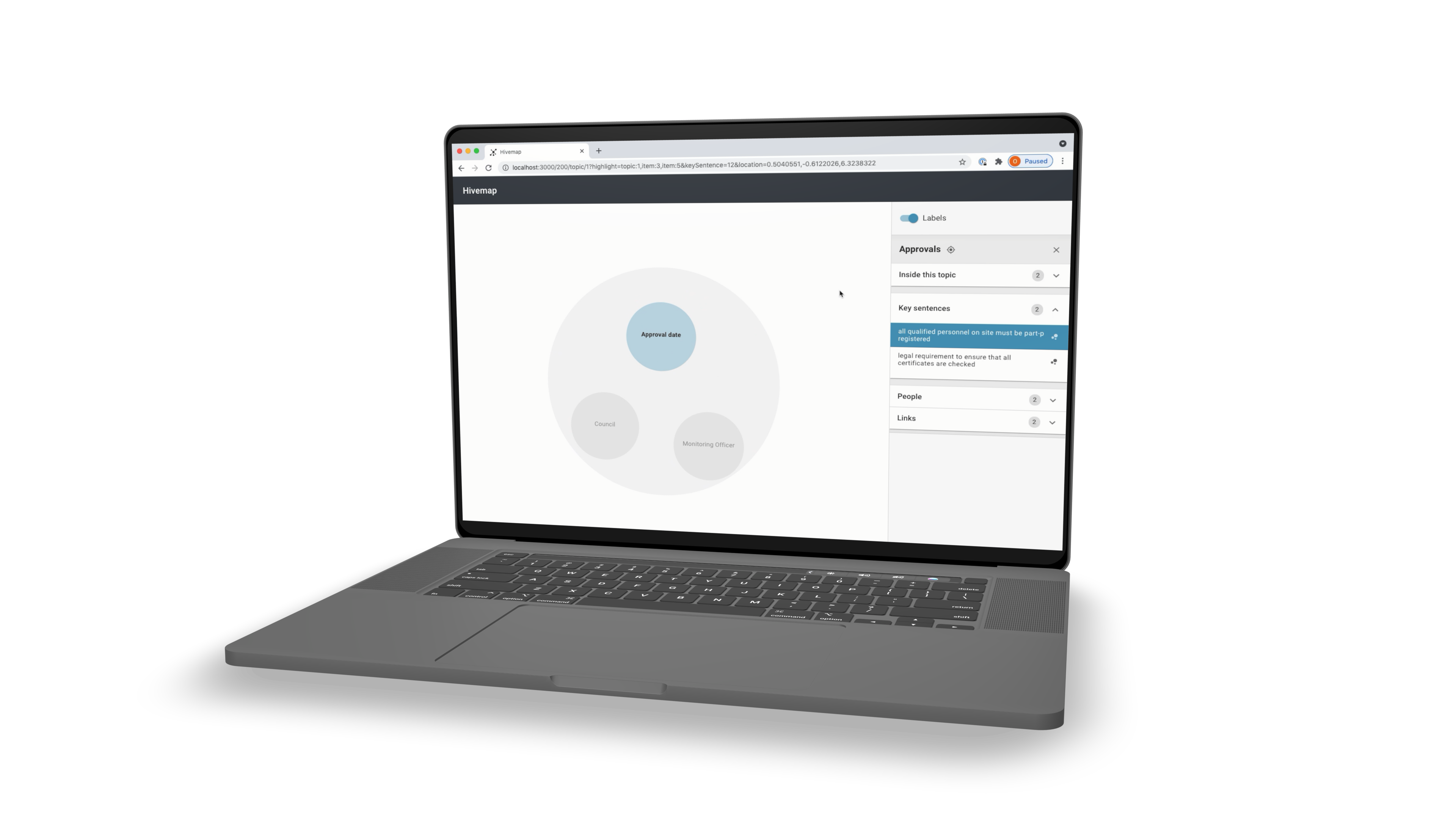 During the UI / UX research and development, we discovered a lot of new possibilities in which the data might be organised and presented to the users. These discoveries were further tested with users, and the successful candidate features were implemented.We handed over the finished solution to our clients, and they have been onboarding early adopter customers from major industry players.

The Danger Farms team were a pleasure to work with, grasping complex concepts quickly to bring their industry-leading knowledge and expertise to further develop our product.